Today's article is from guest blogger Paul Goodwin. Paul was one of the first members of the Scottish War Memorials Project and is one of its most enthusiastic members. The Dumfries and Galloway section of the Project has so many entries thanks to Paul's dedication.

Things were different then! You wouldn’t imagine nowadays that ministers of the church would elect to serve as combatant soldiers with all that entails, including the taking of human life. But in the Great War this was more common than you might think.

The Scottish Ministers War Memorial in St Giles Cathedral, Edinburgh records that 14 ordained Church of Scotland Ministers and 6 ordained United Free Church Ministers died as combatants during the First World War. Four of those listed came from overseas parishes and of the 16 who came from Scottish parishes, an amazing 7 came from the South West of Scotland. 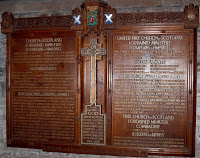 Andrew Stewart was the minister of the United Free Church on the Isle of Whithorn and was commissioned into the Northumberland Fusiliers. On 18th September 1917 he was awarded the Military Cross for gallantry but was killed in action at Ypres just two days later. There is a memorial plaque and font dedicated to him in his former church at the Isle of Whithorn. His citation for the MC reads “For conspicuous gallantry and devotion to duty. Under heavy machine-gun fire he crawled up to within five yards of an enemy strong point and opened fire with a Lewis gun to cover his platoon's attack on the strong point.”

John Davis was the minister at Buittle near Dalbeattie and enlisted into the Royal Army Medical Corps as a Private in 1916. He died on active service on 22nd July 1917 and is buried in Amara Cemetery, Iraq. Although some may regard medics to be non-combatants, they are trained to use firearms and expected to use them in defence of themselves and their patients, he is listed as a combatant on the St Giles memorial. There is a memorial plaque to him in his former church also a gravestone type memorial to him has been placed inside the grounds of a listed derelict church in Buittle church grounds. He died leaving a widow.

Herbert Dunn was the minister at Sheuchan Church in Stranraer and was commissioned into the Cameronians. He died as a 2nd Lieutenant on 25th October 1915 and is buried in Alexandria, Egypt. There is a plaque memorial to him in his former church which is now the High Church of Stranraer.

Lieutenant Frank William Saunders was the minister of Anwoth Church, Gatehouse of Fleet before he was commissioned into the Argyll & Sutherland Highlanders. He was 37 years old when he died on 1st August 1918 leaving a widow and was buried in a small churchyard in France. Anwoth church is now privately owned but available for private use as a church or hall and contains a memorial to him consisting of a brass plaque with a bust of him plus a frame with photographs etc.

Robert Gordon Millar from Dumfries was the minister of St Mary’s Church, Dumfries when he was commissioned into the Argyll and Sutherland Highlanders as a 2nd Lieutenant. He died (leaving a widow) on 11th May 1917 from wounds received the previous month and is one of nearly eleven thousand British soldiers buried at Etaples cemetery in France. Like others in this article, he is recorded on a number of memorials including individual and parish memorials in his church, St Andrews university Roll of Honour, Dumfries memorial, Arbroath High School memorial and Arbroath and District Roll of Honour (he was a native of Arbroath). [Ed. note, we have covered 2nd Lt. Millar before on the Blog, here]

Dugald McArthur from Ardrossan was a 2nd Lieutenant in the Black Watch and died on 21st April 1917. He is commemorated on the Basra memorial in Iraq but we have not yet identified any other memorials that he may appear on other than the main civic memorial in Ardrossan.

John Rankin Donald Smith was the minister of Cathcart Street church in Ayr and served in the Royal Scots Fusiliers as a 2nd Lieutenant. He died at Ypres on 31st July 1917 and is remembered on the Menin Gate memorial. He was only 33 years old when he died leaving a widow. We have yet to identify any memorials to him apart from the main Ayr Burgh memorial.

In the 21st century we have come to expect a relatively passive role of our men of the cloth in ministering to the sick and injured, consoling the bereaved and giving spiritual guidance. So it may come as some surprise that, during the Great War, the conscience of a church minister could often take him on a more active path to take up arms against the enemy, especially in the South West of Scotland.

Readers will note that this is only a small part of what may be found about these men but further information about the men and their memorials can be found on www.scottishwarmemorials.com. More detailed research should probably begin with two books: "Sons of the Manse Muster Roll" (1915) and "Muster Roll of the Manse" (1919).
at 06:00