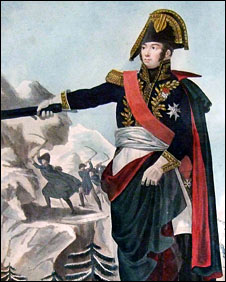 A plaque is to be unveiled later to an 18th Century French military commander in the South Uist village where his father was born.

Marshal MacDonald's father Neil was born in Howbeg, on the west coast of the Hebridean island.

Herve Bouche, the French Consul General in Scotland, has been invited to attend the unveiling.

He said: "In 1825 Marshal MacDonald visited South Uist for the only time in his life.

"His meteoric rise through the ranks of the French Napoleonic army is nothing short of incredible, and I am delighted that we are commemorating his life and visit to South Uist in this way."

Neil MacDonald, a Jacobite, played a key role in Charles Edward Stuart's escape following his defeat at Culloden in 1746.

His son became a highly regarded military officer and following Napoleon's defeat he became a minister in the French government, a Peer of the Realm and was elevated to Arch-Chancellor of the order of the Legion d'Honneur.

His statue stands on the side of the Louvre, his name is inscribed on the Arc de Triomphe and one of the boulevards of Paris was named after him.

Marshal MacDonald returned from his trip to South Uist in 1825 with soil from the land at Howbeg. It was buried with him when he died.

When he died in 1840 at the age of 70 he was given a state funeral and buried in the Pere Lachaise cemetery in Paris. 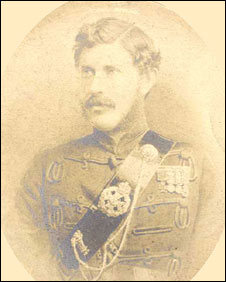 The medal, which is Britain's highest military award for valour, was given to Glasgow-born Major John Simpson Knox.

The medal and cannonball, which took off part of Major Knox's left arm, went under the hammer at Spink Auctioneers in London.

A fellow soldier had picked up the missile that hit Major Knox and later gave it to him.

Major Knox, who was born in 1828, ran away from home in Glasgow at 14 and illegally joined the Scots Fusilier Guards as he was under age.

By the time the Crimean War had begun in 1854 he was an acting sergeant major.

He performed the first of two acts of valour on 20 September 1854 during the Battle of the River Alma.

According to the citation for his medal, he "acted with conspicuous courage in reforming the ranks of the Guards at a decisive moment of the action".

The second act of valour occurred in June the following year.

Then, while serving as a lieutenant with the Rifle Brigade, he volunteered for an attack on heavily defended Russian positions at Sebastopol.

According to the citation: "He remained in the field until he was twice wounded, all the time acting with great gallantry."

It was during that attack, on a fortress defending the city of Sebastopol, that Major Knox was struck on the left arm by the cannonball. 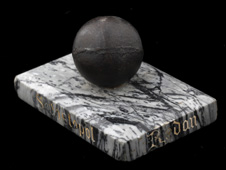 After his retirement from the Army in 1872, he took up residence at Cheltenham where he died on 8 January 1897 and was buried in the town's cemetery.

"The medal is being sold with a Russian cannonball, the very one that smashed into Knox's arm. In all my years of working with rare medals and war artefacts I have never seen a more unusual keepsake."

Victoria Cross medals are still cast from bronze taken from cannons captured from the Russians at Sebastopol.

The VC was being sold along with three other medals he was awarded - the Crimea Medal, the French Legion of Honour and the Turkish Crimea Medal.

The seller wishes to remain anonymous. 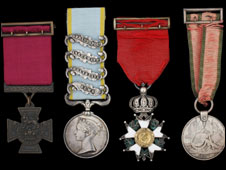 In October last year I made a post about the Fife Military Project. I'm happy to say that they now have a website up and running. Please take a look - it's well worth checking out:

Scottish VC for auction - got a spare quarter of a million pounds?

A Victoria Cross given to a 25-year-old World War II bomber pilot from Broughty Ferry is expected to fetch more than £200,000 at auction this month.

The VC was awarded posthumously to Wing Commander Hugh Gordon Malcolm in 1943 for his part in a daring raid over the Chougui airfield in Tunisia.

He led 10 Blenheim bombers on the mission in 1942 despite knowing it would "court almost certain disaster".

The medal is to be auctioned at Spink's London saleroom on 22 April.

Wing commander Malcolm had decided to complete the sortie on 4 December 1942 after receiving an urgent request for help despite not having a fighter escort.

After taking off with 18 Squadron, they were at first able to attack the airfield unhindered.

However, a short time later the squadron was met with an overwhelming force of Luftwaffe fighters.

During the onslaught, Malcolm attempted to maintain his attack formation, but one by one his aircraft were shot down until only his bomber remained.

Eventually his plane was also hit, crashing in a ball of flames.

The medal, which is the highest honour for gallantry in the armed forces, was first awarded by Queen Victoria in 1854.

The sale follows that of another Victoria Cross awarded to World War II bomber pilot Bill Reid, from Crieff.

More information can be found on the Spinks website here.

Email ThisBlogThis!Share to TwitterShare to FacebookShare to Pinterest
Labels: VC

From the BBC News website. As someone who loves a good cup of tea, I'll be looking out for this. If you see it on sale, please let me know.

The tea served to Britain's servicemen and women for nearly 90 years is to go on sale to help raise money for troops injured in Iraq and Afghanistan.

Naafi Break, created by the Navy, Army and Air Force Institutes (Naafi), will be available in 80 branches of Spar.

It is the first time the UK-made tea has been sold on the High Street.

Naafi, which supplies tea to troops in Afghanistan, said it would donate 50p from every box sold to the charity, Help the Heroes.

Naafi chief executive Reg Curtis said: "Our famous Naafi tea has been the beverage of choice for the British armed forces since 1921 and we are delighted to work with Spar to ensure it is widely available for everyone to enjoy for the first time in history."

The Naafi organisation was created by the British government in 1921 to run recreational establishments needed by the armed forces and sell goods to servicemen and women and their families.

It runs clubs, bars, shops, supermarkets, launderettes, restaurants and cafes at most British military bases and also canteens on board Royal Navy ships.