Culrain in the Highlands is a quiet place. There is a small train station which serves a magnificent castle-turned-youth-hostel and not much else. You probably won't find yourself driving through it, you have to drive to Culrain for a reason.

It is along a single track road about three miles from Ardgay. Ardgay (pronounced Ardguy) isn't even on the main road north now that the Dornoch Firth Bridge takes the A9 traffic away from the Kyle of Sutherland.

As you come out of Culrain station or drive past it, you wouldn't realise that the trees in the small field right beside you are on top of what may or may not be an arrow-headed ravelin; if it is then it makes it one of the few battlefields in Britain with earthwork defences still visible.

If you looked along the small road heading towards the hills and woods in the distance you wouldn't realise that it bisects the battlefield which saw the final defeat of one of Scotland's most famous warriors.

Luckily for me I had a look at the detailed Inventory of Scottish Battlefields entry for Carbisdale before I went so I knew exactly where to go and what to look for. Anyone turning up without a copy of that would be left scratching their heads.

I'll not go into detail of Montrose's 1650 campaign through the Far North and the battle itself because it is all in the Historic Scotland pdf above. Instead I'll give you some photographs of the battlefield. Surprisingly few are out there already.

Being the middle of summer it was absolutely chucking it down with rain when I visited so I pretty much stuck to the roads when taking them.

I'll start with a panoramic view of the battlefield taken from outside the community hall. On the left side of the road are the fields where Montrose formed up his troops. The hills behind them would have been where the Ross and Munro contingents waited to see which way the battle turned. On the right of the road is where the Royalist troops ran towards the woods and where they were cut down by Strachan's mounted troops.

Facing south from the road looking across the battlefield. It is a field and there's not much more to be said about it. 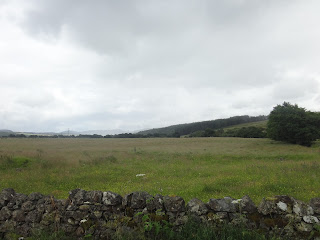 The woods north-west of Culrain. On the right are the slopes of Lamentation Hill. The Danish contingent of Montrose's army supposedly made a stand in front of this wood. 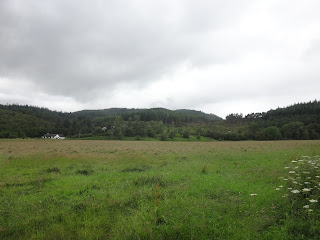 The ravelin? It is hard to make out in these photographs but the ridges in the ground in this field form a 'V' shape with the point under the trees. This small field is beside the road running alongside the railway station. This photograph is taken opposite the community hall facing south. 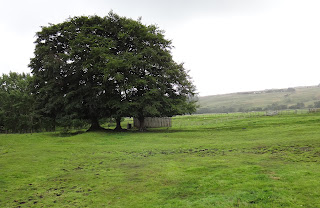 Another shot of the ravelin field. This is taken from beside the bridge which crosses the railway line facing west. This hopefully shows the 'V' more clearly on either side of the trees. 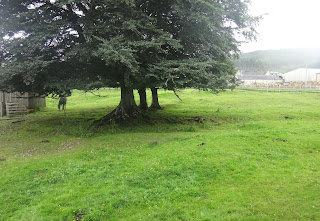 Behind the community hall. There is a ditch here seemingly. It was too overgrown and certainly too wet for the light shoes I was wearing for further investigation on the day I was there. 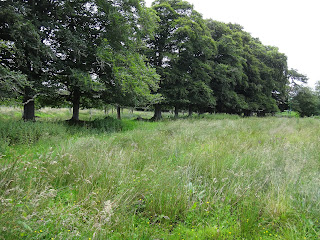 We've been very quiet on the blog front recently. We've really got no excuse other than we've been working on various projects which will hopefully be of interest. We can't ay much more than that, but in the future we'll hopefully have lots of news for you.

In the meantime, we thought we'd show this short video. We've already mentioned this on our Faxcebook and Twitter feeds, but here it is on the blog for those of you who don't subscribe to either.

You may recognise some of the photos in the slideshow from our "Image of the Day" posts on the blog, but there are a number of images you won't have seen before. Hope you enjoy it.