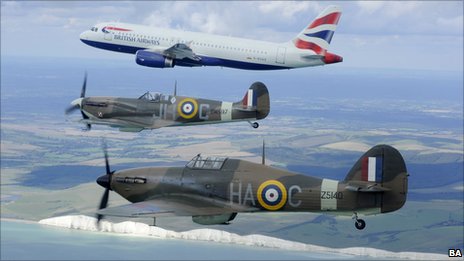 Fourteen Battle of Britain veterans have taken to the skies in a special memorial flight.

The chartered airliner flew over parts of England and the English channel that saw some of the fiercest aerial combats.

The British Airways Airbus was accompanied for part of the way by a Spitfire and Hurricane from the period. 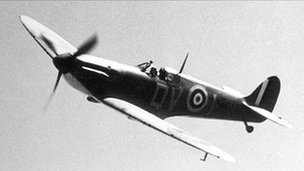 The battle for air supremacy between the RAF and the Luftwaffe in 1940 was a decisive chapter in World War II.

The daily dogfights in the skies of southern England saved Britain and averted a German invasion.

Flight Lieutenant William Walker, the eldest veteran at 97, told the BBC on his return: "It really was a great day, a very special occasion.

"It was a marvellous sight to see a Hurricane and Spitfire flying, the sun glinting on them above the clouds. The Spitfire is the most exciting plane to see. I would love to fly one again."

Bill Bond, of the Battle of Britain Historical Society, who organised the two-hour flight, said that with just a few remaining veterans still alive he had wanted to mark the 70th anniversary celebrations with "something a bit special".

Before taking off for the flight he told the BBC that with the Hurricane and Spitfire flying alongside the British Airways Airbus, it "would be the first time that any of the veterans had flown in formation since the end of the war".

Another of the veterans, Wing Commander Bob Foster, said the flight was an important reminder to those who were not born at the time as it "would bring home to (them) what happened way back 70 years ago".

"This is what we are trying to get over to the younger generation, the importance of the battle fought then."

The plane, which also carried 15 widows of Battle of Britain pilots, flew across the Home Counties, the Isle of Wight, northern France, the Netherlands and parts of the North Sea.

These areas were the main arenas of the Battle of Britain. It was over the English channel that Flt Lt Walker was shot down in 1940.

Based at an airbase in Surrey, Flt Lt Walker was often sent up two or three times a day. On one such mission he, along with two other planes, was scrambled to meet the enemy. They soon came under attack and his Spitfire was shot at by a Messerschmitt 109, the main German fighter plane.

"My leader was shot down and badly burnt, my number two was killed and I got a bullet in my leg and my plane was shot to pieces. I bailed out at 20,000 ft," he recalled.

As he gently descended he removed his boots, blew up his Mae West life jacket and landed in the water close to a wreck on the Goodwin Sands just off the Kent coast.

He was rescued by a fishing boat and taken to Ramsgate, where he was met by a crowd.

"They cheered as I came ashore and a dear old lady gave me a cup of tea," he said.

Suffering from hypothermia, he was taken to hospital where he underwent an operation to remove a bullet from his ankle. When he woke up, a doctor was by his side.

"He had a bullet in his hand and told me that when the surgeon prised it out of my ankle it flew out and hit the ceiling. He gave it to me and I still have it as a treasured possession," he told the BBC.

Sad to hear of the death of Bill Millin, the Piper who accompanied Lord Lovat on the beaches of Normandy on D-Day.

Read the Obituary in The Telegraph.
at 21:15 No comments:

Email ThisBlogThis!Share to TwitterShare to FacebookShare to Pinterest
Labels: bagpipes

Charlie McDonald has created a web site for his proposed book "Kitchener's Keelies" which will deal with the history of the 15th, 16th & 17th Battalions of the Highland Light Infantry.

Feel free to visit the site. Its in the early stages at the moment, but should hopefully be updated with more information soon.

And of course, if you have any information Charlie would no doubt be delighted to hear from you.

The Royal Highland Fusiliers, 2nd Battalion The Royal Regiment of Scotland (RHF, 2 SCOTS) will be deploying to Afghanistan in September, and in order to support the Jocks and their families both during and after the tour, a wristband appeal has been set up.

You can find more information, and purchase a wristband by visiting the site www.whitehackle.com

Wristbands can also be purchased at the RHF Museum shop in Sauchiehall Street in glasgow.
at 06:30 No comments:

This isn't really an item of news, but I wanted to show off a little.

The other week I paid a visit to the Royal Scots museum, and I wanted to thank Tom Gordon for taking time out to show me some of the "behind the scenes" stuff. It's always interesting to see what goes on in the background.

And also, you sometimes get to see some very interesting items: 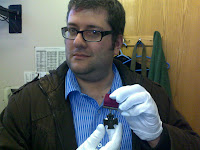 Yes, it's genuine. And yes, I was utterly flabbergasted to be able to get to see it.
at 07:54 No comments:

We've posted before about our transcription of the Roll of Honour for the Commercial Bank of Scotland. It's ben hosted online in a few places, but unfortunately the last place we had it available has now removed all their scanned books and documents.

So, for the third, and hopefully final time, we have a new location for the Roll. It can now be found at the Internet Archive at this location.

Plus, as a special bonus we now have a new item available for you to download. It's the February 1916 issue of "The Outpost", the magazine of the 17th Batalion of the Highland Light Infantry. You can also download this entirely free of charge, also from the Internet Archive.

Finally, we hope to make more items available in the future via the Internet Archive. You can check what we have available by visiting the following link: