"Mad Jack" Churchill - Who's Who in Scottish Military History 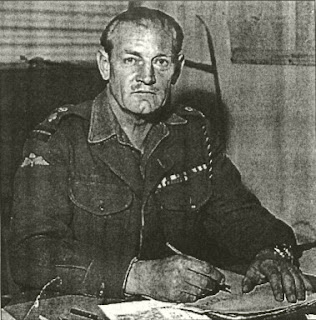 On the face of it, today's "Who's Who" subject wasn't Scottish. He served in more than one Scottish regiment, but he had no Scots blood in him. However, in many ways "Mad Jack" Churchill might just be the most Scottish person we've ever mentioned.
John Malcolm Thorpe Fleming Churchill (better known as Jack) was born in Hong Kong to English parents and was educated on the Isle of Man. He graduated from Sandhurst in 1926 and was commissioned in the Manchester Regiment.

His early years in the army saw him serving in Burma, where he spent a lot of his time travelling long distance on his motorbike.

Peacetime soldiering didn't seem to suit Churchill. He was once reprimanded for carrying an umbrella on parade. When asked why he had it with him he replied "Because it's raining, sir". Eventually he resigned his commission.

While out of the army he worked as a newspaper editor, a male model, a film extra, and also learned to play the bagpipes and mastered archery, even representing England in the World Archery Championship in 1939.

When war broke out he promptly re-enlisted. The "phony war" period didn't suit him and with others he volunteered for a force that would assist the Finnish Army against the Russian. The expedition was cancelled, and Churchill was back in France when the Germans launched their offensive.

Churchill remained aggressive in the face of overwhelming odds - he would mount raids, and lead small groups of picked men in attacks. He led from the front, usually armed not only with his bow and arrow, but with a basket hilted broadsword as well.

During the retreat to Dunkirk Churchill took command of his company when the company commander was wounded, and it was during this time that an unlucky German soldier became possibly the only casualty of the Second World War of a bow and arrow. Churchill's men had been ambushed, and the shot from his arrow was the signal for his men to open fire. It's interesting to speculate exactly how the German commander reported the death of one of his soldiers from a longbow...

Churchill's exploits during the retreat to Dunkirk are all the more remarkable when you learn that he had been wounded in the neck. His men had told him to run for cover, but he explained that he had been too tired to do so. For his exploits he was awarded the Military Cross. When asked why he had carried a sword he explained "any officer who goes into action without his sword is improperly dressed."


Back in Britain, he volunteered for the Commandos - he didn't know what they were, but it sounded dangerous and likely to lead to more fighting so naturally he was in.

He took to the training well and seemed perfectly at home in the Highlands of Scotland. His first raid was in Norway, and he led from the front landing craft, play his pipes as the ramp lowered.

A later attack at Salerno was led by Churchill against a force much larger than his. He organised his men into six columns and had them charge in the darkness yelling at the top of their lungs. The German defenders were so confused and disoriented they had no idea ow many men were attacking them. The 50 commandos met every one of their objectives and took 136 prisoners.

Churchill was far in front of his own men, and he and a corporal named Ruffell advanced into the town on their own. Totally undiscovered, they heard Germans digging in all around them. What happened next is so unlikely that even Churchill described it as "a bit Errol Flynn-ish".

They took the first German post silently. Churchill appeared out of the dark, sword in hand and whispered "hande hoch". The Germans immediately surrendered. Churchill tied his revolvers lanyard around the neck of one of the Germans and led him along each successive post in turn. The German sentries would initially think it was one of their comrades before being confronted by a commando wielding a broadsword. Altogether, Churchill and Ruffell captured 42 prisoners, together with their weapons and a mortar which had been manned by 10 men alone.

Churchill was leading the Commandos in Yugoslavia in 1944 when he was eventually captured. His men were either all killed or wounded, and his revolver ammunition had run out, so he simply sat and played sad tunes on his bagpipes until he was wounded by a fragment from a grenade.

He was sent to Sarajevo, and then Berlin, as it was believed that he was a relative of Winston Churchill. There is a story that after landing at Berlin he managed to set the plane on fire. While it can't be proved, it seems typical of him.

He was sent to Sachsenhausen concentration camp, but he eventually escaped by crawling under the wire at night. He planned to walk to the coast but was captured a few miles from the sea. Eventually he was sent to a camp in Austria.

In April 1945 he took another chance at escape. When the lights failed, he simply used the cover of darkness to walk out. He had kept a rusty can and a few onions on his person in case he got the chance and he used this, and any other vegetables he managed to purloin on the way, and decided to walk 150 miles to Italy. After eight days he met an American armoured column, who initially didn't believe he was an officer until he managed "a credible Sandhurst salute, which may have done the trick.”

After the war he qualified as a parachutist and transferred to the Seaforth Highlanders, before serving in Palestine as second in command of the 1st Battalion of the Highland Light Infantry. While there he successfully defended a medical convoy from Arab attack. All the more remarkable since he did this in full dress uniform of kilt, white spats, glengarry and red and white diced stockings - he had literally come straight from a battalion parade.

Later life saw him serving as an instructor in Australia where, naturally, he became an expert in surfing. He finally retired from the army in 1959 with a Military Cross and Bar, and two Distinguished Service Orders.

His eccentric streak remained even in retirement. When travelling home on the train, his fellow passengers were confused to see him throwing his attache case out of the window. When asked why, he replied that the train passed his house, and throwing his case into his garden saved him from having to carry it home.

So we return to my opening point. Why is Churchill the most Scottish man on our blog? Well, the evidence speaks for itself. He was an eccentric bagpipe-playing, sword wielding warrior who loved a fight. What could be more Scottish than that?
at 06:10