Calgacus - Who's Who in Scottish Military History 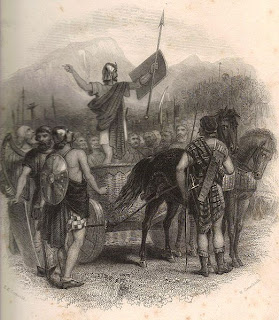 At the top of our Blog we say that we post on "all aspects of Scottish Military History, from Mons Graupius to Afghanistan"

We've done a lot of posts on more recent events but have very few from around the time of the Roman invasions.

We start at Mons Graupius because that victory of the Romans over the natives of Scotland in 82AD is the first recorded battle in Scotland.

The Celts who occupied the land before 82AD would have fought over the land for centuries before then, but it was the Roman writer Tacitus writing down the campaigns of the Roman general Gnaeus Julius Agricola who first mentioned the tribes of what the Romans called Caledonia.

Tacitus was the son-in-law of General Agricola and the history he wrote would obviously be biased towards the Romans. We have to take what he says with a pinch of salt, but he gives us the name of the first recorded native of Scotland. His name was Calgacus.

The Battle of Mons Graupius was obviously a major affair because it was the only time Agricola could get the Caledonians to fight a pitched battle. The Romans won the day but they did not win the war. The Caledonains lived on in the hills to harry the Romans and eventually force them to withdraw back to Britannia.

The only record of Calgacus (the swordsman) is from a speech he gives the night before the battle in "Agricola". He doesn't get a mention during or after the battle. He is not in the list of prisoners, so he either died in the battle or perhaps he never even existed. He may only have been in the book to let Tacitus give him some impressive lines.

And that is why we still know of Calgacus today. It is the Caledonian who gets the most memorable lines of the book.

"...If the enemy be rich, [The Romans] are rapacious; if he be poor, they lust for dominion; neither the East nor the West has been able to satisfy them. Alone among men they covet with equal eagerness poverty and riches. To robbery, butchery, and rapine, they give the name Empire; they create a desolation and call it peace."

Whether it was Tacitus or Calgacus who came up with the words, they sum up the Roman Empire succinctly; and his final line is still used today to describe the actions of heavy handed conquerors.
at 05:10

Email ThisBlogThis!Share to TwitterShare to FacebookShare to Pinterest
Labels: Romans, Who's Who...