Alexander Brook - The Story Behind The Name 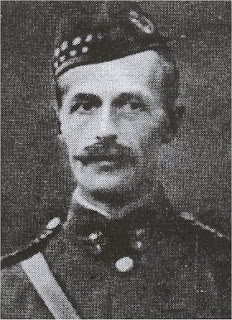 Of all the names listed on the Bank of Scotland war memorial, Alexander Brook is noteworthy for two reasons. Firstly, he is (so far as we can tell) the oldest casualty of the bank for the First World War, and as a Lieutenant-Colonel, he is also the highest ranking.

Alexander Brook was born on the 12th of June 1865, the only son of John Brook, a master grocer and Annie Leckie, of Primrose Bank, Haddington. He attended the Knox Institute in Haddington, before attending Edinburgh University as a Student of Arts between 1883 and 1887, gaining an M.A. He was appointed Writer to the Signet in 1891.

Shortly before the outbreak of War he was appointed County Clerk and Treasurer to the County of East Lothian. He was also a member of Haddington Town Council.

He served as joint agent at the Haddington branch of the Bank of Scotland from 1895 until his death in 1915. At the time bank agents usually had no formal training and were normally "upstanding" members of the community, such as lawyers, and it was while working as a solicitor that Brook was joint agent.

Brook had joined the 8th Battalion of the Royal Scots in 1886, and had been awarded the Volunteer Decoration for his services, and on the outbreak of war he was mobilised as a Major. He was subsequently promoted to Lieutenant-Colonel in November 1914 and was Mentioned in Despatches.

At the time of his death his battalion had taken part in three days of fighting, and he and a Major Gemmill were in a trench studying a map when a shell burst beside them. Major Gemmill was deafened and buried by the shell, and on clearing himself found the Colonel Brook had suffered a head wound from shrapnel.

Four men were detailed to carry Colonel Brook to an aid post, and in the process two of these men were themselves wounded. It was to no avail as Colonel Brook died shortly afterwards on the 19th of May 1915. He was buried the following day, 100 men from the battalion attending the service.

Colonel Alexander Brook is buried in Section II, Row H, Grave 12 of Bethune Town Cemetery. He is commemorated on the Bank of Scotland memorial in The Mound, the civic memorial at Haddington as well as at Edinburgh University.