The Caithness sand that helped the war effort

John O'Groats beaches lost to war effort to be recalled 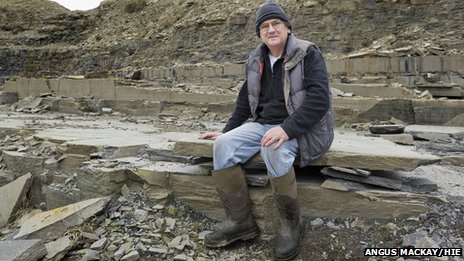 
A new arts project will celebrate John O'Groats beaches that lost their white sands to the Dig for Victory campaign during World War II. The sand was prized as a soil improver due to the large volume of empty and broken shells it contained.

With food rationed, Dig for Victory encouraged people to grow vegetables in their gardens and allotments to help feed themselves and others.

Stones carved with images of how the beaches had looked are to be created.

Sutherland-based artist Gavin Lockhart has been commissioned to undertake the £15,000 public arts project. It is part of wider efforts led by Highlands and Islands Enterprise (HIE) to revamp John O'Groats.

Mr Lockhart plans to develop a trail marked by six Caithness flagstones leading people to views across the Pentland Firth to Orkney. Each stone will be carved with images taken from photographs of similar beaches to those found at John O'Groats before World War II.

Mr Lockhart said: "It's a shock to realise that this rugged, rocky shore was in living memory a beautiful white sandy beach and deserves us to look upon this landscape with a little more consideration of its historical sacrifice."
at 18:24