A recent announcement by the Ministry of Defence has indicated that nine sites in Scotland used by the Army, Royal Navy, Royal Air Force, Defence Equipment & Support and the Defence Infrastructure Organisation are to be disposed of over the next few years as part of a nationwide reduction of fifty six MoD bases. In some cases the announcement was expected as earlier strategic reviews had already proposed the closure of some of these properties as being surplus to requirements and no longer fit for purpose for 21st Century armed forces. Fort George is Georgian, Glencorse Barracks is Victorian and Redford Barracks is Edwardian.

The closure programme in Scotland starts with Craigiehall on the outskirts of Edinburgh in 2018. Perhaps it will return to its old role of being a hotel? Redford follows a few years later but it is only the old Edwardian infantry and cavalry barracks which will go; the more modern Reserves site next door which hosts several regular and reserve units - from the Army, Navy and Air Force - will remain.

Recent strategic reviews and reductions of our armed forces have left a large MoD estate with not enough units to fill them. This has happened many times in the past. The Royal Navy no longer has a presence at places like Invergordon, Port Edgar or The Royal Elizabeth Yard. When the Queen Elizabeth aircraft carriers are built and leave Rosyth for Portsmouth their crews go with them and MoD Caledonia will move to Edinburgh. Over the past fifty years barracks have been sold off and redeveloped in Inverness, Perth, Aberdeen, Ayr, Glasgow and Hamilton as the Army has shrunk. That’s not even taking into consideration all the drill halls across the country which have disappeared as the TA became the TAVR and then Army Reserves. Two RAF air bases in Scotland have recently been converted to army barracks when their aircraft departed - Kinloss and Leuchars, although some non-flying RAF units remain on the bases as lodger units alongside the army. Former RAF bases in Scotland now host museums, racetracks, car boot sales and annual music festivals.

There are currently four infantry barracks in Scotland – Fort George dominates the Moray Firth and the other three are all part of the Edinburgh Garrison - Redford, Glencorse, and Dreghorn. This announcement leaves only Dreghorn by 2032. So the question is not so much what happens to the buildings and land but what happens to the units occupying them?

The Royal Regiment of Scotland has already been reduced from five regular battalions to four in the ten years it has been in existence. The 5th Battalion now only exists as Balaklava Company a public duties incremental company. Will the next sixteen years see a further reduction and a loss of the 4th Battalion and even the 3rd? The Royal Scots Borderers are in Northern Ireland and the Highlanders are in England. 3rd Bn The Rifles currently occupy Dreghorn but will the next few years see a reshuffle and disbandments of these battalions? The big battalion regiments in England have been repeatedly reduced and amalgamated. Why should the Royal Regiment of Scotland not suffer a similar fate over the next sixteen years?

It should be remembered that only five years ago Dreghorn was also to go along with Redford and Glencorse and a super-barracks was to be built at Kirknewton airfield. That plan was scrapped two years later under a further review when the army left Germany. Dreghorn has been reprieved this time round and is unlikely to be disposed of any time soon. Who is to say that in five, ten or fifteen years time another strategic review will see a requirement for units to continue to be based in Glencorse or Fort George? With continued fighting in the Middle East, a new occupant in the White House - and an old-school one in the Kremlin - who knows what future defence reviews will bring?

On a less contentious note, something else which is of particular interest to us in the Scottish Military Research Group is the war memorials currently in the barracks. Fort George is currently shared with Historic Environment Scotland and no doubt they will take ownership from the MoD when the army eventually moves out. We’ve sixteen years to find out what the Scottish Government will do with the site but it’s likely the Seaforth Highlanders’ memorials will remain. But what happens to the regimental memorials at Glencorse and Redford? Based on previous barrack sales, these estates will probably be redeveloped into housing and it is unlikely the memorials will remain. Perhaps they will relocate to Dreghorn or the Castle. We’ll certainly be keeping a close eye on what happens to them.


These are the sites being disposed of and what is happening to the current occupants: 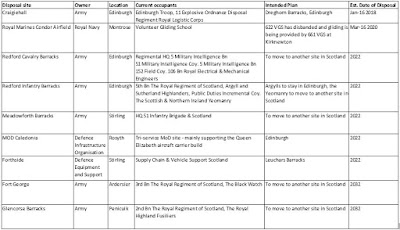