Culloden is widely recognised as the last pitched battle on British soil. On this day 265 years ago the penultimate battle took place.

It was during the Jacobite Rebellion but didn’t involve Prince Charles’s main army. It was fought between local troops of the Earl of Sutherland, who were loyal to the Government, against the Jacobite troops of George Mackenzie, Earl of Cromartie. This wasn’t highlander vs. lowlander, or English vs. Scot. This was a battle between clansmen; a chance to settle some scores.

On 15th April 1746 word reached Cromartie that he and his men were now needed back in Inverness to rejoin the main army as Cumberland approached. They would leave Dunrobin, cross Loch Fleet at the narrows at Littleferry and head for Inverness.

Thinking that there were no government troops in the area Cromartie did not arrange a proper order of march and let his force split into two; the main body of his troops headed off first whilst Cromartie and his officers were entertained by a local Jacobite sympathiser - the Countess of Sutherland in Dunrobin.

They seriously underestimated their opponents. Sutherland men, supported by Mackays, were watching the Jacobites from the small hills above Golspie. Eager to take revenge on the Jacobites who had been pillaging their homes for weeks, the locals saw their chance when the main Jacobite Force passed along the narrow strip of land between the hills above Golspie and the sea.

The Sutherland men charged into the flank of the column. The leaderless Jacobite clansmen unprepared for battle took to their heels and streamed towards the ferry crossing to try and escape. A few escaped on the boats that were there, but most were rounded up by the Sutherland men 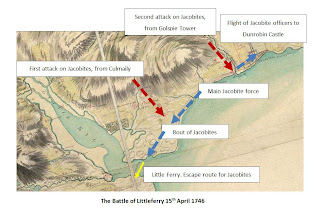 A company under Ensign Mackay quickly followed this victory by capturing Cromartie and his officers who had locked themselves in Dunrobin Castle.

Over two hundred Jacobite prisoners were taken and the rest of Cromartie’s force melted away into the hills to go home. 150 of those prisoners were transported as slaves to the West Indian and American plantations. They would have had plenty of time on the long voyage across the Atlantic to rue the day when they marched through Golspie without any pickets to guard their column, and deprived Prince Charles’s army of 500 valuable men.
at 00:54